Our mission is innovation in the monitoring of air quality

Prof. Ivo Allegrini graduated in Chemistry at the University of Rome. He gained a wealth of experience in air pollution in indoor, urban, industrial and remote areas through a series of studies and researches carried out on behalf of universities, research centers, major industries and public administrations in Italy and abroad. 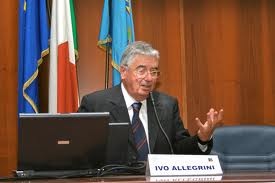 Prof. Ivo Allegrini graduated in Chemistry at the University of Rome. He gained a wealth of experience in air pollution in indoor, urban, industrial and remote areas through a series of studies and researches carried out on behalf of universities, research centers, major industries and public administrations in Italy and abroad. Since 1971 he was engaged in scientific research in the Institute for Atmospheric Pollution of the Italian National Research Council where he was appointed as Director for 22 years from 1986 through 2008. He had the opportunity to develop important projects in several aspects of air pollution such as those in polar areas (Arctic and Antarctica), those on environmental sensing with airborne and satellite platforms and on chemical and physical processes related to emissions, transformations and depositions of air pollutants. He gave a major boost to the development of measurement and control equipment and devices for the measurement of pollutants in gas and particulate phase. He also developed a great deal of research for the protection of artistic heritage, especially inside museums, as well as in the context of the institutional activities of many local authorities, international organizations, ministries for the adaptation of legislation and for law enforcement in civil, criminal and administrative matters. He was also very active in the legislation and technical development in European Commission. Its activity is attested by about more than 200 scientific papers, technical papers, books and participations in Congress, as well as from the participation as a lecturer in many courses of higher education. He was active since 2001 in the Sino-Italian cooperation program for Environmental Protection where he developed important projects on air pollution for 2008 Beijing Olympiads and EXPO 2010 in Shanghai as well as in many other Chinese cities such as Urumqi, Lanzhou and Suzhou. Now he is engaged in assistance programs with the Beijing Municipality Environmental Protection Board and with the Asian Development Bank. His current field of technical interest is on environmental legislation and the chemical and physical processes of formation and monitoring of suspended particulate matter. Prof. Ivo ALLEGRINI is recognized as one of the world’s leading experts in air pollution and environmental issues.

We use cookies on our website to give you the most relevant experience by remembering your preferences and repeat visits. By clicking “Accept”, you consent to the use of ALL the cookies.
Cookie settingsACCEPTACCEPT ALLREJECTRead More
Manage consent

This website uses cookies to improve your experience while you navigate through the website. Out of these, the cookies that are categorized as necessary are stored on your browser as they are essential for the working of basic functionalities of the website. We also use third-party cookies that help us analyze and understand how you use this website. These cookies will be stored in your browser only with your consent. You also have the option to opt-out of these cookies. But opting out of some of these cookies may affect your browsing experience.
Necessary Always Enabled
Necessary cookies are absolutely essential for the website to function properly. These cookies ensure basic functionalities and security features of the website, anonymously.
Functional
Functional cookies help to perform certain functionalities like sharing the content of the website on social media platforms, collect feedbacks, and other third-party features.
Performance
Performance cookies are used to understand and analyze the key performance indexes of the website which helps in delivering a better user experience for the visitors.
Analytics
Analytical cookies are used to understand how visitors interact with the website. These cookies help provide information on metrics the number of visitors, bounce rate, traffic source, etc.
Advertisement
Advertisement cookies are used to provide visitors with relevant ads and marketing campaigns. These cookies track visitors across websites and collect information to provide customized ads.
Others
Other uncategorized cookies are those that are being analyzed and have not been classified into a category as yet.
SAVE & ACCEPT